We’ve put together a list of beer-related did-you-knows to impress your mates with.

Ale hasn’t, strictly speaking, been brewed in this country for about six hundred years. Traditional ale is just water and malt without the addition of hops – which brewers began using in the 15th century after it was introduced to the Brits by the Dutch – renowned for their love of aromatic green flowers.

Bass Pale Ale registered its iconic red triangle in 1876 as the first ever trademark in Britain. The global beer earned the admiration of Edward VII, inflamed the imagination of Edgar Allan Poe, brought pleasure to Buffalo Bill and inspired Napoleon Bonaparte to set up a similar brewery in Paris – an idea he apparently abandoned when told that the water in France wouldn’t be able to create the inimitable sulphuric “Burton Snatch”. Stop laughing at the back.

Cans keep beer better than bottles. They’re like mini metal kegs that don’t get light-struck and they don’t allow oxygen in to affect the beer. They chill quicker than bottles, they don’t break as easily and, without long bottle necks, cans are cheaper and more environmentally friendly to transport. Also, unlike long necked beer bottles, cans never get wedged into the blowholes of innocent dolphins.

Dieters may like to know that beer contains no fat or cholesterol whatsoever and contains less carbohydrates than a gin and tonic. But if you have loads of crisps and peanuts with your beer then you’re likely to put on weight. It’s not f***ing rocket science.

Earliest written account of brewing using hops came courtesy of Hildegarde of Bingen, a 12th century nun who is also credited with the first written description of the female orgasm – which we like to file in the fiction section of the Thinking Drinkers library.

Finnish sahti is one of the world’s oldest beer styles and brewed in a rather bizarre fashion. The mash, made up of a variety of grains including rye and barley, is filtered through a bed of juniper twigs, seasoned with juniper berries instead of (and/or in addition to) hops and fermented with baker’s yeast. It tastes like the lovechild of a German hefeweizen and a Lambic beer. A good one for those who like gin…..or Moomins.

‘God is Good’ is the name brewers gave to the strange shape-shifting substance now known as yeast. Prior to the 17th century and without the luxury of a microscope, yeast was mere mysterious manna from heaven. All brewers knew was that something in the beer, somewhere in the dregs of the froth and the bubbling wort, was transforming a sugary sludge solution into a liquid that made you happy and made other people look more attractive. If Early Man had owned a microscope, he’d have realised that God wasn’t really involved at all.

Hops are a member of the same botanical family as cannabis. An aphrodisiac for men yet an inducer of sleep for women, they are not an altogether ideal accompaniment to heterosexual lovemaking. Hops are not the ‘grapes of beer’ as they don’t provide any fermentable sugars – they all come from the malt. Hops are the spice and seasoning in beer – added early in the brewing process for bitterness and later for aroma. Eating hops can be highly toxic to some breeds of dogs. Greyhounds and Golden Retrievers are especially susceptible. Dogs – stay away from hops. Hops are healthy for chickens’ digestive systems, as they keep harmful bacteria from entering into their intestines. Chickens – eat hops if you want. Up to you.

International Bittering Units is the currency by which bitterness in beer is measured. An IBU rating is a complex calculation that takes weight of hops, alpha acids, wort and alcohol into account – too nerdy to go into here. While malty beer tend to have an IBU of around (15-30) while highly hopped American-style Double IPAs such as Lagunitas Waldo’s Ale boast an IBU in the region of 100.

Jesus Christ didn’t turn water into wine, he turned it into beer. The earliest scriptures state that Jesus, the lead character, turns water into shekhar, a Hebrew word meaning strong drink and, crucially, a derivative of the ancient Semitic word Sikaru – which means barley beer. The reason beer was banished from subsequent versions of the bible was that, in an astonishing display of academic arrogance, 17th century English translators believed beer to be beneath the son of God. So they took it upon themselves to transform Jesus Christ into a cork-sniffing, cravat-wearing wine drinker draped insouciantly on a banquette of an All Bar One. He wasn’t. He was a beer guy. Where do you think the word HeBrew comes from?

Keeping beer in a cellar can improve and enhance its complexity and flavour when ‘laid down’ (it’s better to stand them upright in the dark) and left to improve over time. The best beers to “age”, like a wine or a port, are those over an ABV of seven or eight per cent. Bottle-conditioned beers carry on fermenting in the bottle, and as the yeast Pac-Mans up residual sugars, the beer becomes leaner and full of fruity esters.

Lambic is the name given to beers brewed using spontaneous fermentation in Belgium. The yeast that ferments the beer is ‘wild’, naturally-occurring yeast coming from the atmosphere rather than yeast that’s been deliberately added from a laboratory. These tart, sour beers are more like cider or sherry. We like them but they take a bit of getting used to. If you want to be a beer geek, it is imperative that you pretend to like them.

Mild. A quintessentially English beer style synonymous with S$xually-repressed, Morris-dancing, stiff-upper lipped, cucumber-munching, cricket-ball rubbing Englishmen of yesteryear.  Low in alcohol yet big in flavour and eminently drinkable, it was first brewed to slake the rapacious thirsts of sweaty-browed farmer types and, later, whet the weary whistles of industrial workers. It poured supreme in the nation’s pubs at a time when Britain had a manufacturing industry to speak of. So much for the sepia-tinted days of yore, sadly Mild now sees as much action as Ann Frank’s drum kit. But Timothy Taylor does a great one called “Golden Best”.

Ninkasi was the goddess of beer and the mother of all creation. The original recipe for beer, the oldest recipe ever recorded, was a hymn to Ninkasi – which was important as, back then, beer was safer than water to drink.

Originally, brewing was the exclusive preserve of women – right up until it was seized upon as a large-scale commercial venture. “Brewsters” and “ale wives” are frequently mentioned in medieval history and, according to ancient Finnish folklore, ale was first created by three women: Osmotor, Kapo, and Kalevatar. It consisted of saliva from a bear and wild honey –a combination you’ll probably soon be able to get form a an artisan independent operating under a railway arch somewhere.

Pilsner was first brewed, in 1842, in the town of Pilsen in Bohemia by a notoriously bad-tempered Bavarian called Josef Groll. It’s widely regarded as the world’s first golden lager and is now the most popular beer style in the world.

Quart, up until the end of the nineteenth century, was the standard serving in British pubs. It was the equivalent of around two pints.

‘Real McCoy’ is a term that derives from Jim McCoy, a Prohibition-era bootlegger whose beers were impressively similar in taste to the real brands.

Soft water, with barely any mineral salts, is ideal for brewing lager while mineral-rich water, harder than Chuck Norris doing quantum physics, is generally used to brew ales, porters and stouts. But now, boffin brewers can manipulate their water to brew any style they like so the local water doesn’t always matter.

Trappist beers are really rather good. They can only be brewed by the Cistercian Order of the Strict Observance. Renowned for their rigorous religious obedience, sustained silence and strict adherence to self-sufficiency, the Trappists have six abbey breweries in Belgium (Orval, Westvleteren, Rochefort, Westmalle, Chimay and Achel) and several others scattered around the world including Leicestershire’s “Tynt Meadow”, England’s only Trappist brewery.

Up until relatively recently, doctors would often prescribe small amounts of beer to pregnant women as a rich source of nutrients and iron. Please don’t drink if you are pregnant as we’ll get into massive trouble.

Vikings believed that a giant goat whose udders provided an endless supply of beer awaited them in Valhalla, the Viking heaven. It is unclear whether this is true but the smart money is on the Vikings being full of sh1t.

Weihenstephan in Friesing, Bavaria, is widely regarded as the oldest brewery in the world. Records show that it began brewing since 1040 but, with evidence of a hop garden on site as far back as 768, it’s thought that the “Holy Stephen” Benedictine monks had brewed prior to that. In the Winter, the average temperature in Friesing drops below freezing. German efficiency knows no bounds…

Yeast. It’s everywhere. Over there, there and even over there. It’s even on your inner thigh. When used in brewing, in general, it either floats to the top (ale) of the beer after fermentation or to the bottom (lager). The former prefers things warm while the later operates best in colder climes.

Zythophile is the term given to someone who loves beer.

The Thinking Drinkers podcast “Around The World in 80 Drinks” is available here:  www.thinkingdrinkers.com 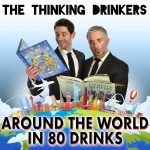