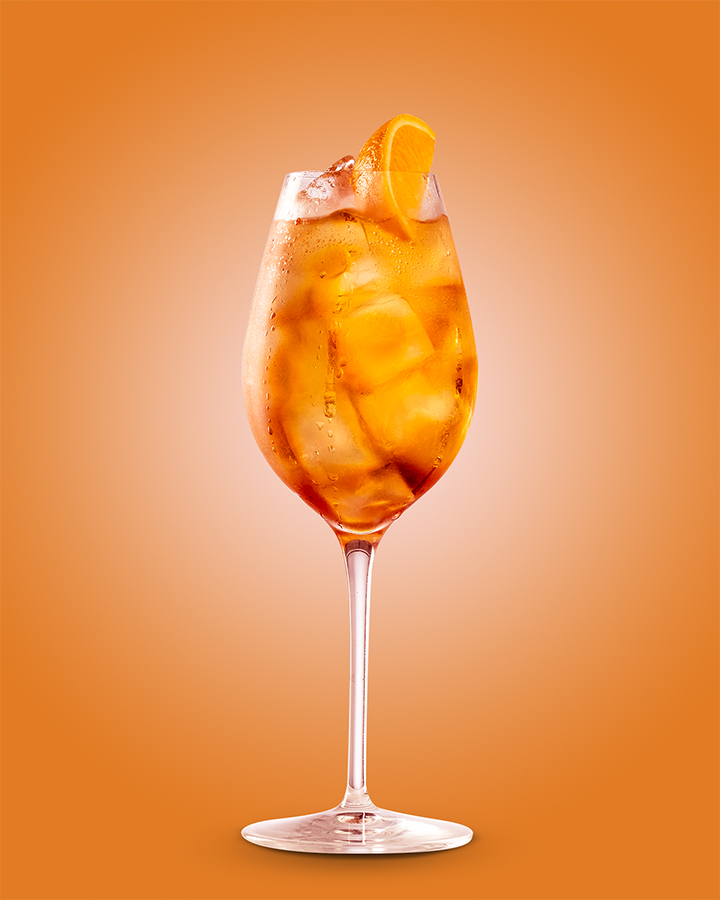 The Spritz may seem, on the face of it, a playful, perky affair but it’s a drink with a deep backstory. One can go all the way back to the Greeks to discover the first example of the Spritz – namely wine mixed with water.

At Ancient Greek Symposiums, imbibing institutions central to civilised society where men of tremendous stock would come together to courteously air their opinions and pontificate about politics, wine was drunk slowly.

Its flow was moderated by a ‘symposiarch’ who would dilute the wine with water according to the seriousness of the subjects being discussed. Wine was watched to ensure that no single merrymaker reached a state of inebriation before another – not something people bother with during bottomless brunches these days.

The Romans, who planted vines all over Europe, also mixed their wine with water. In fact, they mixed lots of stuff with their wines – honey, herbs and spices, roses, snow and even sea-water.

Yet it wasn’t until the 18th century that the concept of the Spritz, as we recognise it today, began to emerge. While the Northwest of Italy gave us vermouth in the 18th century, followed by bitter liqueurs a century later, the Northeast is where the Spritz is believed to have been born – but it was the Austro-Hungarians rather than Italians who were responsible.

While hooch historians widely attribute the term Spritz to Spritzen, the German phrase meaning ‘to spray’, there is some uncertainty as to when the Austro-Hungarian influence made itself known in Northern Italy.

Some say it was back in the 19th century when the Hapsburgs, Austro-Hungarians renowned for having massive chins caused by inbreeding, ruled the region. Others, meanwhile, start the Spritz tradition during World War 1 when the Austrians were also strongly represented in the region.

Unaccustomed as they were to the bitter strong wines of Italy, having grown up with Gruners and Reisling wines, the Austrians apparently would order their wine with a spritz of water – or so the story goes. Like all tales of ambiguous origin, it’s true if you believe it.

But, let’s face it, the Spritz story only begins with bubbles – more specifically, soda – which started appearing in Italy in the late 1900s and early 20th century when the Americano first emerged.

While word of the modern Spritz began to spread all over Europe, the Spritz didn’t crossover into classic cocktail territory until the 1920s and 1930s with the addition of bitter liqueurs – arguably the most crucial component of the Spritz.

Bitter tonics, liqueurs and tinctures had been being mixed in the backrooms of Turin’s bars and coffeehouses since the mid-19th century as medicine. Yet, aided by advertising, they soon became social lubricants designed to be drunk both before and after a meal – and this the ‘aperitivo’ and ‘amari’ rituals took root.

These drinks were inherently Italian and used Italian ingredients (taking ownership of a drink inherited from Austo-Hungarians) and by the 1920s, the aperitivo occasion had become big business in the north of Italy.

Today, the Spritz has become a key component of any quality cocktail list. Loose as it is in its core characteristics and indeed its construction, the Spritz is a drink that can be incredibly diverse in both style and flavour – as proven so deftly by five of London’s leading cocktail bars.

“Our Hacha Mezcal Spritz has been one of our most popular cocktails since we opened the bar. It has the same refreshing properties and characteristics of a classic spritz but with more complexity and vegetal notes from both the Mezcal and our homemade rainbow carrot cordial. I love experimenting with cocktails that have key ingredients but can be improvised upon to extract the maximum amount of flavour. At its heart the Spritz is a bitter cocktail but it’s a balanced bitterness that makes it deliciously quaffable!”

“A bitter aperitivo is classic but this Spritz brings a few more playful flavours as well. Gorgeous blood orange and exotic passionfruit really makes the whole drink come alive. In an ice-filled wine glass, pour in the vermouth, bitter, water and syrup and top up generously with Prosecco.”

“The base of the Thaimee cocktail is a ‘mulled’ sake. We use a dry sake (Daiginjo sake) and add Darjeeling Tea, sweet spices such as honey, orange peel, lemon peel, cloves, ginger etc. We then cook it in a bain-marie for around 8 hours, filter it and then top it with prosecco. The cocktail is garnished with a dehydrated apple and a little butterfly.

“We realise that there’s been a rise in no and low abv cocktails so we created the Thaimee in the style of a Spritz to cater to those audiences. The cocktail is a very easy drinking and refreshing cocktail – it is actually a very popular drink at Opium!”

“Spritz is a wonderful aperitif style serve to start your night with, have before dinner or have any time you feel! It’s so easy to make many different variations. We like to mix up different vermouths & sherries (like the Big City Spritz) inspired by some of our favourite sherry cocktails (Bamboo or Adonis). The spritz is also great as it’s so easy to whip it. Just build in your favourite glass & garnish with your favourite seasonal fruit.”

“In Lyaness, we operate our cocktail menu through Seven core ingredients that feature throughout. This drink, the Mario Kart Spritz, falls under the Infinite Banana ingredient. The role of Infinite Banana is to cover the full spectrum of the flavour of banana, from a rich salted caramel punch to green & fresh top notes.

“The best way to showcase this is through a drink that’s simple and elegant, such as a rum spritz. In this drink, you can taste that spectrum of flavour through a drink that is clean, elegant, and somewhat unexpected. A cordial made from banana leaf is added in order to accentuate those fresh, green flavours, as well as a touch of cider brandy. It is then finished with some sparkling wine and a caper leaf.”