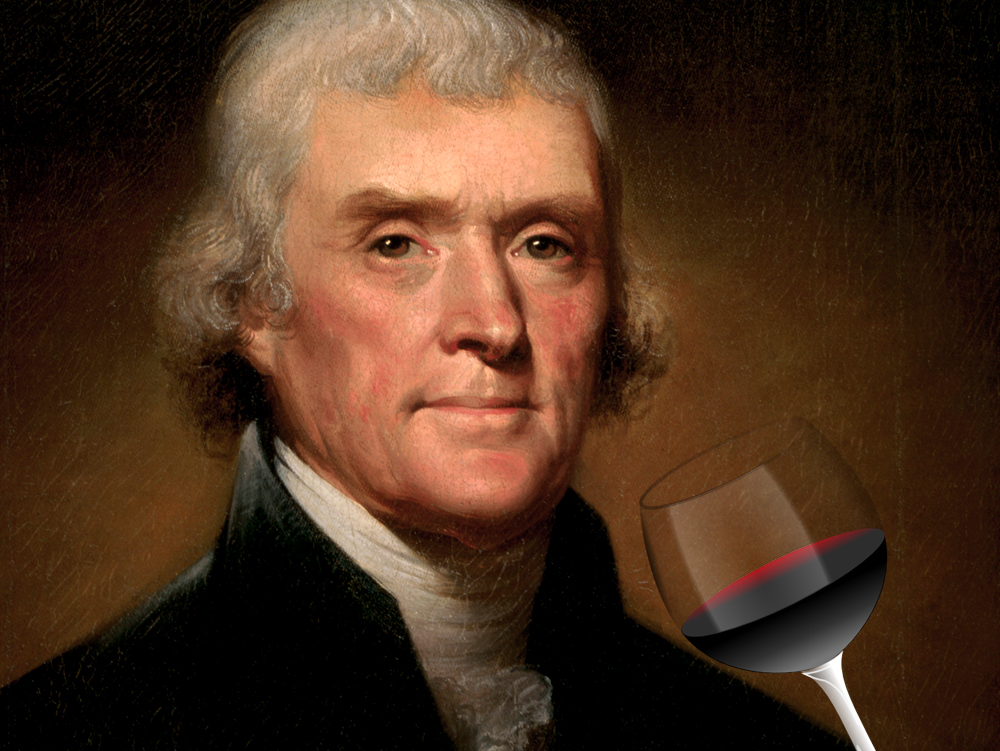 Thomas Jefferson was a proper clever-clogs, his hinterland as huge as the nation over which he presided. A polyglot fluent in five languages, a scientist, an architect, a musician, an archaeologist, an astronomer, a highly skilled statesman who studied mathematics, metaphysics and philosophy.

He was a rapacious writer, a voracious collector of books and historical artefacts who even found time to rewrite the entire New Testament the way Jesus would have intended. He also kept a mockingbird called Dick.

But, above all, Jefferson was the original wine nerd, arguably eighteenth century’s America’s most accomplished amateur oenophile. Considering he was carried around on a pillow by servants as a child, his wine tastes were refreshingly rustic. His fondness for Bordeaux, Burgundy and Champagne (but not the fizzy wines which he dismissed as a fad), was balanced out by a love of frugal French wines from the South-West and lesser-known Italian drops, Montepulciano being his favourite. He was also partial to Port, had a soft spot for Sherry and made a habit of drinking Madeira with a touch of brandy.

He fell in love with grape-based giggle juice while at University in Williamsburg but it wasn’t until after the Revolution, when Jefferson moved to France in 1784 that his devotion to wine was allowed to breathe.

Sent by Congress to develop commercial links with the Old World, Jefferson arrived in Paris, dressed himself like a Parisian dandy and bought himself several cases of first-class Bordeaux.

He revelled in France’s laissez-fair approach to drinking “In the pleasures of the table they are far before us, because with good taste they unite temperance,” he wrote. “They do no terminate the most sociable meals by transforming themselves into brutes. I have never seen a man drunk in France, even among the lowest of people.”

In 1787, Jefferson embarked on an epiphanic three month tour of Europe’s most prestigious wine regions “Combining public service with private gratification”. He deftly disguised it as a diplomatic mission undertaken in the interests of America and told friends that he was heading to Aix-en-Provence to cure his wrist, which he’d injured whilst jumping over a kettle in his garden.

He staggered through the vineyards of Burgundy and the Rhone Valley before dropping down into the Piedmont of Italy and back through Bordeaux. Later jaunts took in Germany’s grape-growing regions, Champagne and beyond.

The trips perfected his palate and he became quite the connoisseur of Burgundy and Bordeaux and his wine soaked writings have since proved prophetic in their praise of the regions’ finest chateaux and vintages.

Everywhere he went, Jefferson took notes of the terroir; the soil, the elevation, the winemaking techniques and, crucially, any similarities between the local landscapes and those back home in America.

On return to Virginia and using cuttings that he’d sent back from Europe, he repeatedly tried to plant grape varieties at Monticello (his mountaintop residence where he also built a brewery and a distillery). While his vines failed to take root, his vision of America as a winemaking nation did – albeit 150 years later.

A passionate plonk proponent throughout his life, Jefferson campaigned furiously to lower taxes on the import of table wines. “I think it is a great error to consider a heavy tax on wines as a tax on luxury.  On the contrary, it is a tax on the health of our citizens”.

Wine consumption, he argued, encouraged sobriety and stemmed the sinister creep of spirits on society. “No nation is drunken where wine is cheap; and none sober, where the dearness of wine substitutes ardent spirits as the common beverage,” he wrote. “It is, in truth, the only antidote to the bane of whisky”.

His Presidential parties were, by modern standards, notoriously immoderate affairs paid out of his own pocket where he ordered friends to “drink as you please and convers at your ease”.

In 1985, Jefferson’s bottle of 1787 Chateau Lafite Bordeaux was sold at auction for $156,000 – just enough to pay Jefferson’s debt.  What would be of greater value to Jefferson, however, is the America’s establishment as an esteemed wine making nation, its vines rooted firmly in Jefferson’s oenophilic adventuring.