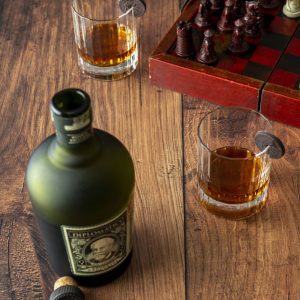 The Mesoamerican Mayans exchanged it as currency; botany boffin Carl Linnaeus christened it ‘food of the Gods’; and fictional fatso Augustus Gloop loved it so much he ended up in a river of the stuff. Yes, if Easter is about anything, then we’re pretty sure it’s about chocolate.

And just as chocolate triggers serotonin, so too will a sip of a sophisticated spirit release a dose of dopamine. So, what with all the relentless gloom in the world, we suggest you double down on the indulgence this Easter and pair your favourite sweet treat with a delicious and discerning distillate.

Chocolate contains over 600 flavour compounds, which is a lot, but there’s also incredible aromatic and flavour complexity in various spirits, particularly those aged in wood. Understanding this will help you pair the styles chocolate to the correct spirit, or at least enable you to defend your behaviour as you fill your face.

Aged rum is a stellar spirit to pair with chocolate, which stands to reason, since rum is made from a fermented sugar source. But to expand beyond the obvious, rum wins here because it boasts a range of righteous ester compounds. Ethyl propanoate is an ester that provides a caramel and fruity rum aroma, while ethyl isobutyrate is a fatty acid ester that delivers butterscotch. Meanwhile rum’s tropical ageing process encourages a rapid interaction with wood to impart phenols like vanilla. In short, this all makes rum taste super nice.

For years we’ve pointed new rum fans to Diplomatico Reserva Exclusiva for chocolate pairing, because the combination of distilling styles, superior sugar source from its native Venezuela, and the amplified tropical aging in American oak casks, actually creates a ready-made chocolate profile in the spirit. The more recent release of the Diplomatico Seleccion de Familia Rum amps up the rum’s complexity and spice, and you’ll discover figs and rains, caramel and banana on the palate.

The team at Diplomatico have always worked closely with quality chocolatiers and discovered their rums pair with 80% coca, and chocolate flavoured with orange. In our own recent trials we’ve hugely appreciated the support of The Secret Truffletier in all our pairing experiments and in this case we found the Orange Batons tick all the boxes.

Coming from a wine base, it should surprise no one that distilling grapes delivers terpenoids – no one who knows what terpenoids are at least. For those who don’t, these organic chemicals bestow your wine with its bounty of floral notes and, when grapes are distilled competently, they remain intact in grape spirit. Maturation in wood could potentially corrupt these delicate Cognac flavours, so the best producers monitor and utilise the wood’s organic compounds to bring out subtle vanilla, caramel and toasted and dried fruits.

At the bolder, richer end of this spectrum is the XO (extra old Cognac). Hine Antique XO as an example, is a fine champagne Cognac, with all from the Grande or Petite Champagne areas, and a blend of more than 40 eau de vies. On the nose you’ll discover bold leather, honey and vanilla to convey the cask interaction, but it retains the floral honeysuckle of the original eau de vies. On the palate there’s a soft spice, vanilla, caramel, even a coffee note, so pairing with dark chocolate would make sense, but equally a delicate spice and soft fruit background, with a light nut profile ensuring more versatility.

The VSOP (very superior old pale) styles are younger, so you can be more delicate still with the chocolate. To compare like for like, the Hine Rare VSOP, brings a sweeter ginger spice and lighter orange fruit to the honeysuckle.

So when it comes to the chocs, for Cognac we suggest lighter chocolate styles, white or milk chocolate, anything with nuts, and even fruit. For the chocolate purist, Cadbury Dairy Milk Fruit & Nut, or for those trying to pretend they’re sophisticated, head to Harrod’s Chocolate Hall (https://www.harrods.com/en-gb/departments/harrods-food-halls/chocolate-hall) and investigate the various offerings from pâtissier and chocolatier William Curley. His praline trio box paired with the Hine XO is eggstraordinary.

Stick with American here. Kentucky Straight Bourbon must be made with a minimum of 50% corn in the mash bill (a sweeter grain than barley) and aged for a minimum of three years in new American oak. The American oak is already rich in vanillin but is also charred, which draws natural sugars to the fore and ensures the wood imparts the richest, spiciest flavours into the spirit.

With a synergy between the wood and chocolate’s vanillin, tannins and lactones, and the rich, sweet bed of the corn-driven spirit, it stands to reason that chocolate and bourbon are brilliant bedfellows. But each bourbon producer will vary the remaining 50% of the mashbill, using more rye or barley, so there’s plenty of variety to consider in the pairing.

Elijah Craig Small batch bourbon is a useful catch all. With an abv at 47%, it remains beautifully balanced and has a spicey but honeyed core, so you can opt for milk chocolate styles to temper some of the heat and spice, but also play on fiery spices in the spirit, ginger and nutmegs.

The spices are slightly sweeter in the Michter’s US Original Sour Mash so more vanilla, cinnamon and orange, as well as a richer toffee note.

Alain Ducasse, a legendary French chef, famed for his three Michelin-starred restaurant at The Dorchester, has Le Chocolat Alain Ducasse and his Roc’s Hazelnut Milk blend of hazelnuts with dried and candied fruits, puffed cereals and shavings of lace crêpes. They’re an incredible pairing for the Elijah Craig. Or try the Soveria candied ginger, which enhances the warmer, sweeter spice of the Michter’s thanks to its Corsican oranges, lemons, grapefruit and ginger.

But for a general win with all American whiskeys, try the aforementioned Secret Truffletier’s Hot Cross Bun Thins, which are, frankly, one of the greatest chocolate creations we’ve had during the Easter spell.