Booze and chocolate: the perfect pairings for Easter
Writing 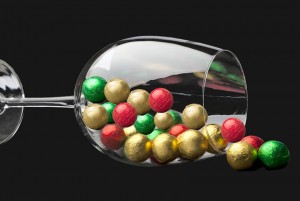 With all the foresight at his disposal, it’s fair to assume Jesus had a drink or two at the Last Supper. Considering how symbolic wine is, it being the blood of Christ and all that, it’s perhaps less than a miracle to see it in Leonardo da Vinci’s 15th century artistic interpretation. But with the proliferation of grain in the region during his first coming, Jesus was actually more likely to rise again for beer. Evidence suggests the common man in the Middle East was an ale drinker.

One thing Jesus would definitely not have indulged in during that final feed was chocolate. Certainly, there are no Easter eggs on da Vinci’s table. It’s a shame because the pairing of chocolate and alcohol can be heavenly, as these perfect combinations to try over the bank holiday weekend prove…

chocolate easter eggApart from being a stunning single malt, the Skye based Talisker is an appropriate choice because of its history. It was created by Hugh and Kenneth MacAskill after they rowed to Skye in 1825 from the smaller island of, wait for it… Eigg. They originally brought livestock to the islands and get this, lambs, the perfect Easter animal – after the rabbit perhaps. Then they set up a distillery. Beautiful Easter synergy. Talisker 10 year old is a complex dram, rested predominantly in American oak, so you’ll find a sweet vanilla and almost banana aroma in amongst the smoke. They use a peated malt at Talisker, which helps drive the smoke through the whisky, but it’s subtle and balances beautifully with the sweeter profile of the whisky, before pepper and a touch of sea salt comes through on the finish. Unsurprisingly, it’s that hint of sea salt that works perfectly with any salted caramel chocolate, like this Cornwall Caramel Sea Salt Easter Egg.

Siren’s creations will give you faith in beer, this being a brewery worth worshipping. The Amigos Británicos divides the crowd a bit and is a collaborative effort with Casita Cervecería and Beavertown, but is a thought provoking take on a farmhouse ale brewed with lime, honey and fresh Santa Fe Grande chilli peppers to provide a great opportunity for chocolate pairing. Chocolate is more than small beans to William Curley, a champion of the confectionery world. Curley has worked closely with beer and actually provided this pairing, it was his view that the massive burst of flavour with the beer provided an entirely new flavour experience and worked wonderfully with his chocolate.

For the confectionery aficionado, here is a rum that tastes like a quality bitter chocolate. Diplomatico RE is a Venezuelan rum, produced using molasses, sugar cane juice and some sugar cane honey. It’s rested in American oak for 12 years and the process adds a Moorish vanilla aroma. The aging in tropical conditions ensures a rapid rate of change in the spirit as it rests in the barrel, taking on the colour and wood character at almost double the rate of a whisky in a temperate climate. As a result there’s just a hint of oak barrel but more mocha, coffee, chocolate and a slight hint of orange in there too. It’s a superbly rounded spirit, perfect for after the supper and works with any dark chocolate, such as Montezuma Organic Dark Chocolate with Chilli.

While searching for wines in Jesus’s hometown we stumbled across this interesting article on The Buyer, celebrating the wines of the Judean Hills. Alas not yet available in the UK, you might head to Lebanon for the excellent Château Musar 2009 Gaston Hochar, available at Majestic.

But if Jesus was drinking wine today, we’d like to think he’d fancy wines from the Rioja region of north-west Spain. Certainly he would if he likes/liked a bit of chocolate because the region has a long and proud association with American oak which, thanks to the vanilla in in the wood, adds a hint of vanilla. Majestic’s Definition Rioja Reserva 2010 is a hugely fruity beast, plenty of plums around the gums and that rich spiced vanilla in there to compliment a rich chocolate. An especially sweet chocolate choice will work here. We went with Cadbury Mini Eggs.