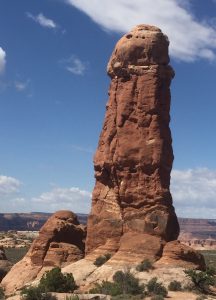 The term ‘buried the hatchet,’ originates from a diplomacy ritual between opposing Native American tribal leaders who would bury their weapons underground during a powwow.

Interesting eh? Of course, the indigenous people were entitled to bury their hatchets in the backs of most cruel Europeans, but explorers Meriwether Lewis and William Clark reported many peaceful encounters in their diaries.

Famous for their 19th century expedition, Lewis and Clark mapped huge swathes of unchartered America while travelling from Louisiana and the Pacific coast, and between 1804 and 1806 also discovered around 100 new animals and nearly 200 plants.

And get this, they undertook their journey with 130 barrels of whisky in tow, understanding the spirit’s value for fortitude and morale, and including it at the expense of other vital supplies.

In other important news, they discovered a massive rock in Oregon and due to its phallic shape, christened it ‘Cock Rock’. Because it looked like a huge penis, see? Which is funny.

By November 1805, the expedition reached the Pacific and camp was set by the sea, with diary entries on this day noting sea spray and a spot of deer hunting. We like to imagine they gathered around the fire and hosted a whiskey and deer pairing event, and if you’d like to replicate that experience, we suggest some Parker’s Heritage from the Heaven Hill Distillery.

Heaven Hill produce Elijah Craig, and Rittenhouse Rye, and launched its Parkers Heritage range to pay tribute to the much loved distiller Parker Beam, the great-nephew of Jim Beam.

He was a whiskey maker of extraordinary standing in the history of the spirit and the Parker’s Heritage range does the legend justice. The 8 year-old Heavy Char Rye is a beautiful whiskey, and while it’ll cost you £259, it pairs perfectly with a deer burger.