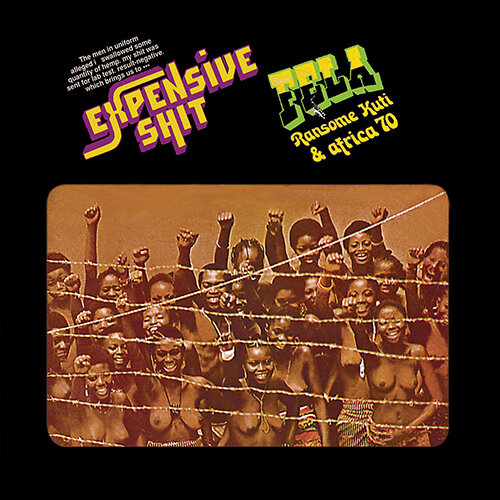 Born in Nigeria, he was schooled in classical music at Trinity College, London, Kuti before creating Afrobeat – a blend of Yoruba rhythms, the fast guitars and ballsy brass of Ghanaian Highlife, jazz, American funk and pidgin English.

The Nigerian authorities didn’t like this very much and launched repeated raids on Kuti’s Lagos nightclub. Fed up with being hounded, Kuti took refuge in his own communal compound which he called the “Independent Kalakuta Republic”.

During one bust, after failing to find any drugs, officers tried to plant some on Kuti, who simply grabbed the joint and ate the evidence. When a doctor refused to pump Kuti’s stomach, he was locked up and the Police simply waited for the ‘proof’ to appear naturally.

Keeping the evidence ensconced within, Kuti waited until his guards fell asleep before surreptitiously depositing it into a communal bucket. When Kuti finally ‘logged-on’, three days after being arrested, there was no ‘pot’ in the pot and the perplexed Police had to let him go, so to speak.

A year later, he released a song called “Expensive Shit” which must have been a favourite with all the lads down the station.

In 1977, the incensed Police stormed the compound, set it alight, attacked and raped its occupants, and dragged Kuti out of his bed by his genitals. He had his skull, arm and legs broken while his 82 year-old mother was pushed out of a window – suffering injuries that she would subsequently die from.

But Kuti continued championing the underclass, formed a political party and then ran for presidency in 1979 – only for his campaign to be, once again, crushed by the brutal establishment.

It’s fair to say, Kuti was an eccentric Fela with some unpalatable attitudes towards women –  he married 27 women from Kalakuta in a single ceremony before employing a rota system to keep them all content. Divorcing them all nine years later, he declared: ‘No man has the right to own a women’s vagina’.

He died from an Aids-related illness in 1987 having been arrested more than 100 times, beaten and wrongly imprisoned for both currency smuggling and murder.

But he remains one of Africa’s greatest ever musicians and we reckon he’d like this classic fiery Tiki cocktail.

Blend all these ingredients with ice and strain into a large Tiki mug and fill with ice cubes. Create a little bowl by hollowing out the squeezed lime-half and place it on top of your cocktail. Pour in some overproof rum, light it carefully with a match and dust some cinnamon over the flame to create sparks. The blow out the flaming rum and gently pour it into the cocktail.