How To Drink Global This Christmas
Writing 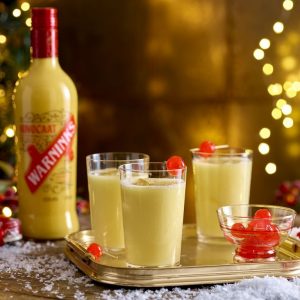 It’s Jesus’s birthday soon – so let’s have a drink. It’s what he would have wanted.

But Christmas is no time to adopt an isolationist approach to imbibing – not least because, regardless of what it is, it’s going to be better than the dusty, crusty bottle of sweet sherry still lurking at the back of your cupboard.

So let us take you around the world, or at least bits of it, to discover what liquids ‘foreign’ folk like to consume during the festive period.

Just as relations with the French look like they can’t get any worse, they announce a Champagne shortage – so depechez-vous and get some while you can.

In France, they serve it in a Christmas ‘Kir Royale’ alongside Chambord – a blackberry liqueur known over there as crème de mure. Which sounds a bit like the worst gift brought to Jesus’s stable by the Three Kings. Sort of.

At this time of year, the French also like to add cockle-warming liqueurs to their hot chocolate. Check out “Verte Chaud” – made with the addition of Chartreuse, a glorious green Alpine elixir made with 130 herbs and botanicals, aged in oak casks, and dating back 400 years.

It’s still made by Carthusian Monks in a mountain Monastery. The monks’ boss is God – and God is Jesus’s dad. So, you know, it all makes sense eventually….

Have you got a hygge knob? We don’t like to boast, but we do. And in December, it’s turned all the way up to eleven.

We’re up to our necks in Nordic knitwear; the wood burning stove and Pomegranate Noir Diffuser are on full blast and we’ve taken all our Andy McNab books off the bookshelf and replaced them with an old hipster typewriter.

To achieve the highest form of hygge requires akvavit. Ok, that’s not what the hygge guides necessarily say but, look, just light another candle and go with us on this one, it’s all about being in the moment.

Akvavit, Denmark’s national drink, is a spirit distilled with botanicals, most notably caraway and dill. Cardamom, anise, fennel, coriander, lemon or orange peel and grains of paradise are also occasionally added – and some liberal Danes even like it with cumin.

Everyone loves a German Christmas Market. Tucking into all those Teutonic tasty treats such as Kartoffelpuffer, Flammkuchen, Knoblauchbrot (you can get a cream for that…sour cream to be precise) and, then of course, the wurst is yet to come: bratwurst, currywurst, knackwurst and weisswurst. Wurst käse scenario? Sausage with cheese.

All usually gobbled down with over-stewed, over-priced sweet and sickly gluhwein served in a paper cup. If you’re making it at home, however, we like to follow Jamie Oliver’s recipe – which involves creating a spiced base wine and dissolving the sugar without burning off all the alcohol form the wine.

In Japan, December is all about the bonenkai – a season of ‘forget-the-year’ work parties where employees and employers alike get a booze on, talk frankly about the last 12 months, and get closer to their colleagues (on what is presumably a state-of-the-art photocopier far superior than those found in the British workplace).

Thing is, a survey recently revealed that huge swathes of the nation’s workforce are reticent to get involved this year due to Covid concerns and a reluctance to get drunk with their bosses.

We suggest they adopt a Churchillian approach. Contrary to clichéd perceptions of Churchill, he was often measured in his measures – his secret being the watering down of his spirits, especially whisky.

He would kick-start his morning with the ‘Papa Cocktail’ – a glass of whisky topped up with water throughout the day. With this in mind, take a bottle of Toki, a fresh and floral Japanese blended whisky, and make yourself a Mizuwari – a Japanese long drink where the whisky is cut with water to a ratio of 1:4 – and served over ice.

Every year, Norwegian brewers produce an annual ‘Juleøl’ – a Winter-warming, often seasonally spiced Christmas ale as part of a tradition dating back to Viking times when brewing such a beer was the law.

There’s no better way to celebrate the birth of sweet baby Jesus, our Lord, our saviour, than with beer. Why? Because Jesus Christ didn’t turn water into wine, he turned it into beer – true story.

The earliest scriptures state that Jesus rocked up to the wedding of Cana and turned water into shekhar, a Hebrew word meaning strong drink that derives from Sikaru – an ancient Semitic word meaning barley beer. Don’t believe us? Where do you think the word, He-brew comes from?

Anyway, if you’re looking for an ace all-rounder then we suggest you substitute the slabs of heavily-discounted cooking lager for a proper lager brewed the way a lager should be – Coldharbour Lager from Brixton Breweryis cold-conditioned for six weeks and is unpasteurised, unfiltered and suitable for vegans – assuming, of course, they’ve got the energy to pick up the funky-looking can.

Beer is also a very flexible friend when it comes to festive food. Christmas eve oysters pair perfectly with a ”Robust Porter” from the brilliant Burning Sky brewery in Sussex (shuck it and see); and choose beer for the cheeseboard too – the more powerful the ponk, the more broad-shouldered the beer.

Fullers Vintage Ale, a Barley wine released with a different tweak or twist each year, pays homage to the most fully-flavoured fromage while the classic Trappist beer Orval is beer’s version of a full-bodied Bordeaux – getting better with age and superb with Stilton.

Mexicans treat tequila differently at Christmas. They don’t shoot it with salt and lime before lunging at that weird guy from IT, the one with the ponytail.

Instead, they sip it in a Ponche Navidano – a traditional warm fruity Christmas punch a stirred up with a cinnamon stick in a clay pot on a smouldering fire. They chuck in loads of delicious fruits and sweet stuff including hibiscus flowers, cane sugar, pears, Mexican hawthorn berries citrus, raisins and prunes – an ideal antidote to any Christmas ‘congestion’ you may be suffering from.