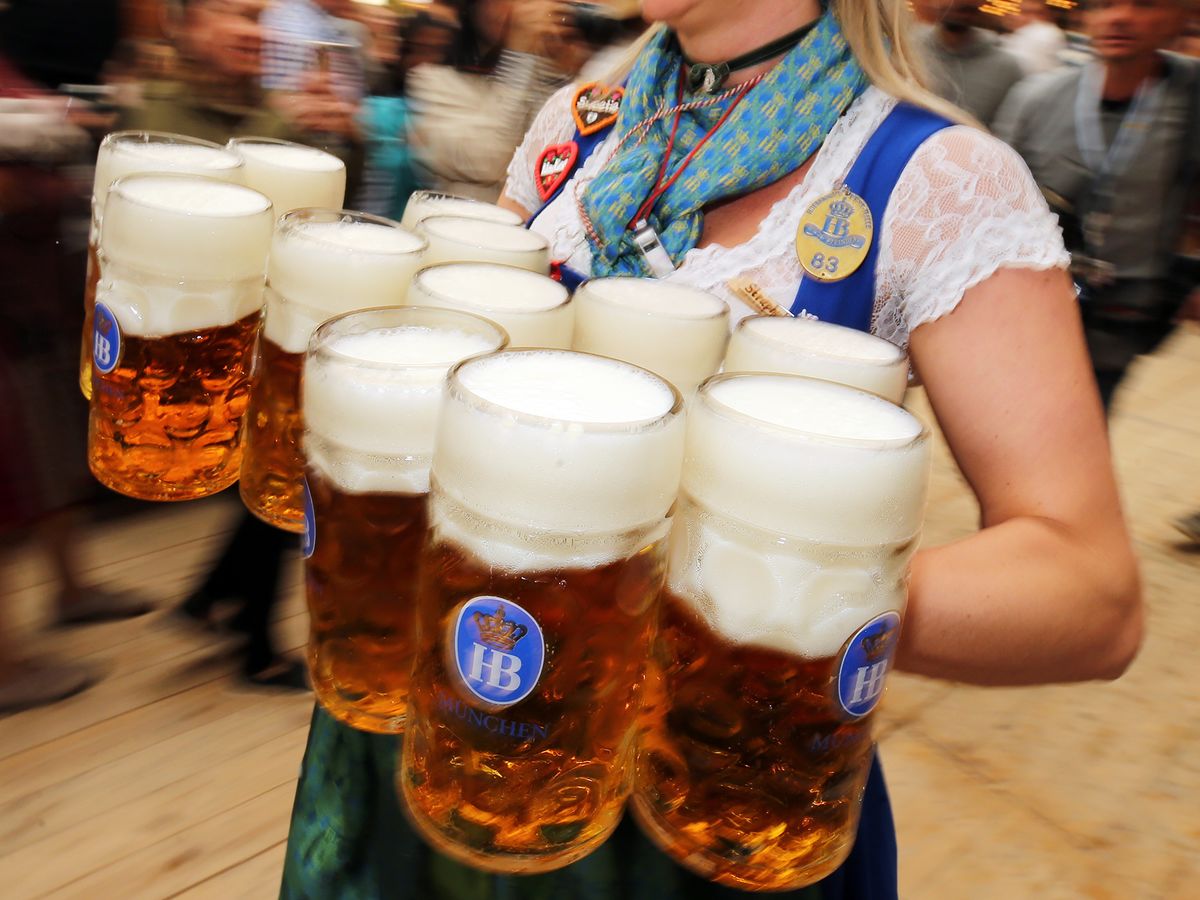 As it’s October, we thought we’d talk about Oktoberfest. Yes, we know that Oktoberfest actually starts in September and only ends in October but we’ve always been advocates of a “Yesterday’s News Tomorrow” approach to journalism.

Besides, it’s a great excuse to talk about lager. The Oktoberfest in Munich is brilliant – with more lazy national stereotypes than you can shake an enormous sausage at.

To soak up the steins of Oktoberfest beer, there are huge hunks of ox and fatty chunks of roast duck, pretzels able to parch a palate from twenty paces are piled high next to artery-clogging slabs of pork knuckle; half roast chickens are handed out with typical Teutonic efficiency and, even after all that, the wurst is still to come; Bratwurst, knackwurst, currywurst, weisswurst and more.

We were offered a sausage with cheese but, to be honest, that sounded like the Wurst Käse Scenario.

There are 14 large tents and around 20 smaller ones, each with its own distinctive character and clientele, and each serving Oktoberfest beers from six Munich breweries (in order of our preference): Augustiner, Hacker-Pschorr, Paulaner, Spaten Brewery, Lowenbrau and Hofbrau.

What a lot of people don’t know, however, is that British breweries were instrumental in the development of Munich’s 19th century beer scene. In 1833, Gabriel Sedlymayr, owner of the Spaten brewery, came to London to learn from local brewers and, it turns out, abuse traditional English hospitality.

Using a specially-designed hollowed out walking cane, he pilfered wort and samples of beer  and took it back to Germany where he perfected the Marzen style. Some years after his industrial espionage exercise, he remarked “It always surprises me that we can get away with these thefts without being beaten up”.

Suffice to say, if he was to try the same trick in Brixton, he’d be waking up with a f***ing crowd round him.

Given this German skullduggery, we’re suggesting three beautiful British lagers to try in October. All of which go well with an enormous sausage or two.

A Bohemian style lager from one of London’s most bohemian neighbourhoods, this beautifully balanced London lager is brewed with not one, not two but three types of noble and modern German hops that bring crispness, floral notes and a tight biting bitterness …with typical Teutonic efficiency.

Lagered for six weeks, Coldharbour lager is unfiltered, unpasteurised, unfined (vegan-friendly) and is ridiculously refreshing. At 4.4%, it’s seriously sessionable too. Just don’t be a dick.

Incidentally, Coldharbour Lane (the inspiration behind the beer) is so called because historically it was lined by simple shelters called cold harbours, where travellers on their way into London could rest and regather their strength before entering the city.

Troncoso, formerly of Little Creatures, focuses on modern versions of classic German bottom-fermented lager styles and their bespoke German-built brewhouse, a swirl of stainless steel and technical precision, is perfect for doing so.

They lead with this Keller Pils, an upliftingly aromatic interpretation of Kellerbier. Meaning ‘cellar beer’, kellerbier is probably the closest thing German lager gets to British cask ale – and certainly one of the easiest paths to conversion for cask devotees.

The six week brewing process, a low and languid fermentation followed by prolonged cold conditioning, creates a lager that is bright and brisk, light on the bubbles with a faintly citrusy fruit twist.