Boozing on the Battlefield
Writing

Whether its cyber, intergalactic or nuclear, remembering the fallen or gossiping about defence secretaries, war is on our minds, and most of us would argue, there’s not a lot it’s good for. 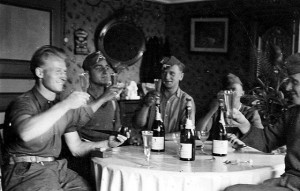 This has been an important year to remember exactly how destructive war can be. As many as 18 million died during the Great War, and 100 years on there have been many sombre moments marking the sacrifices made. It’s also 100 years since the violent charge of communism in Russia, and in November we honour the men and women who lost their lives during the Second World War.

So it might then seem a little glib to talk about booze and the battlefield, but the fact is, until recent years at least, the association has been unavoidable. Historically, alcohol has long been ally for the soldier, whether to boost morale, or to sterilise and anaesthetise.

It’s an association we can take all the way back to the earliest conflicts and the pioneering warmongers. Alexander the Great, one of the most successful warriors of all time, was drunk most of the day, inspired by his father, Philip II of Macedonia, who helped reform the Macedonian army and drank so much he was called the ‘human sponge’ – in his down-time he also perfected the conga dance. Attila the Hun meanwhile ritually necked oxblood, wine and bits of finely grated chair before battle, while Ghengis Kahn downed a mug of fermented horse milk called Kumis.

The Romans had such an affection for wine they provided soldiers with a daily ration. Posca was a mix of sour plonk, vinegar and herbs, which doubled as a morale builder and dose of medicine. When they faced the Celts, they met an angry bunch of beer drinkers – the Gauls too, both tribes loading up on fermented drinks before the battle to build courage (It also caused them to strip naked). In fact, so strong is the link to booze and bravery that it gives us the term ‘Dutch Courage’. When the British fought with the Dutch during the 30 years war, they were served a shot of genever, or Dutch gin, specifically to embolden the troops.

The French drank brandy and such was its importance that they recruited women to dispense it. Viavandiers were dedicated service women who carried canteens of the spirit onto the battlefield for injured soldiers during the 18th and 19th century. And around the same time Nelson and his crews would be drinking in battle, in fact ‘Nelson’s blood’ has become a term for alcohol. Having been mortally wounded in battle, the warrior of the waves was embalmed in a barrel of booze with the sailors reputedly drinking it as they travelled back to England. Nelson’s Blood subsequently became a term for rum.

Indeed, the Navy has long had an association with alcohol. Sir Francis Drake was one of the earliest adopters of a mix close to what we now know as a daiquiri, combining cane spirt with sugar and lime, and these early sailors also added mint when it was available, a forerunner to the mojito. Then there’s the rum ration, sailors given half a pint of rum a day in their pay, a tradition that continued right up until Black Tot Day in 1970. As they enjoyed that, the officers drank gin, mixing it with lime to give us the Gin Rickey.

Alcohol has even been the motive for war. America’s War for independence gathered pace when the British put a tax on molasses, and while we all blame a tea party for the explosion of anger, it was the increasing the prices of rum, the favoured indulgence along the east coast at the time, that really stirred things up.

World War Two also has its share of alcohol-related anecdotes. Great lengths were gone to for beer supplies, the Royal Navy commissioned a brewing boat, while the RAF used empty bomb racks to transport barrels of the stuff. The Americans even painted camouflage on their beer cans. It should also be remembered the victorious leaders were all massive drinkers – Churchill, Stalin and Roosevelt all enjoyed a martini, while the losers were tee total. Mussolini might have once supped on wine, but he later restricted his intake to milk, and while the Kamikaze pilots drank a ritual sake before battle, Japanese leader Hideki Tojo was a teetotal totalitarian. Then, of course, there’s Adolf Hitler, who never moistened his moustache with anything intoxicating.

In Vietnam the troops were sent beer to improve the mood of those unhappy with the local brews, but hard liquor was less available, and was arguably the reason so many turned to mind bending drugs instead. Even those who did get whisky through were drinking it to take the edge off the horrors of war, and from here we see alcohol’s role wane. The truth is booze on the modern battlefield is scarce, some serving commandos are still entitled to a drop if they can prove their fitness, but alcohol in operations is no more. In fairness, we can hardly blame today’s military strategists for calling time on alcohol, there are more effective ways to cure pain and suffering, and a drunk soldier is clearly not as effective as a sober one. Even so, we’ll raise a glass to the fallen this month and remember the brave with a discerning drink.