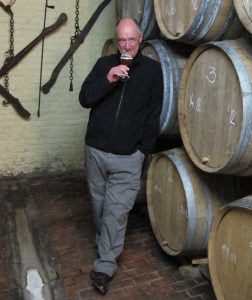 “God is good” was the name given to the fermentation process during the Dark Ages.

Back then, when possession of a microscope would have you hailed as a witch and thrown down a well, no-one knew of yeast’s existence nor how fermentation occurred.

Ale-making alchemy was simply seen as a miracle. It was mysterious, magical manna from heaven – turning humdrum wort into a substance that was safer than water and made life that little bit easier to cope with.

The extent of the Almighty’s influence on contemporary Lambic brewing remains unclear, something for the creationists and chemists to quarrel about. But there’s one particular divine intervention that Armand Debelder, a legend among lambic producers, could have done without.

On the 16th May 2009, Armand’s warehouse – containing thousands of litres of languidly maturing lambics – exploded. A dodgy thermostat had failed to turn off a heater, the Mercury had risen to more than 140 degrees Farenheit and 5,000 bottles had shattered in the heat.

Worse still, more than 80,000 bottles of Geuze were ruined – oxidised and unfit for consumption. It bankrupted Armand and, within months, he’d lost the lease on the brewery. It was, Armand thought, a sign from God – a God that isn’t always necessarily good.

Bereft of a brewery and a third of his beer, Armand questioned carrying on. “It was tough, people didn’t accept that I wanted to give up” says Armand, glass of geuze in one hand, the other pushing his baseball cap and giving his head an exasperated rub. “People didn’t want the tradition to die. I wasn’t allowed to call it a day. My wife kept telling me I had to keep going.”

Thankfully, dogged devotion and blind faith is an integral part of the lambic culture. It does delayed gratification better than any other beer style and, whether you’re creating it or drinking it, patient perseverance pays off.

Debutant drinkers don’t always see the light. If, at first, you don’t succeed in ‘getting’ lambic or geuze then try, try again. Keep the faith. “You have to learn to love these beers,” says Armand, swirling the geuze around in his wine glass. “When you take your first sip, clean the mouth with the geuze and wait a few seconds,” he adds, allowing silence to descend.

“Then take a second sip and truly taste it, roll it around the tongue and completely clear your mind of what you expect beer to taste like. And then take a third sip. If you don’t like it, perhaps it’s not for you right now,” he says, before adding: “But, one day, I think it will be…”

Moneymen may find the concept of Lambic and geuze particularly hard to swallow. It is, in all fairness, a ludicrous idea for a business. An ever inconsistent esoteric beer reliant on an ethereal natural phenomenon, dependant on maverick microflora and then entombed, along with any profits, in wooden tuns for years – it doesn’t get filed in the ‘fast buck’ folder. “Here you buy a beer from a brewer,” adds Armand, “not a banker.”

It was fellow brewers such as Lindemans and Dogfish Head rather than banks that helped Drie Fonteinen following the disaster.  “The kindness of others was overwhelming,” adds Armand. “People helped me open 80,000 bottles of oxidised beer, pour it into a tank and distil it.”

It was reborn as Armands Spirit and inspired Armand to keep going. After all, he had a lambic legacy to look after. The Drie Fonteinen blending business has been in his family since 1953 when his father Gaston bought it, along with an inn, from Jan-Baptist Vanderlinden – whose father had built it in 1883. 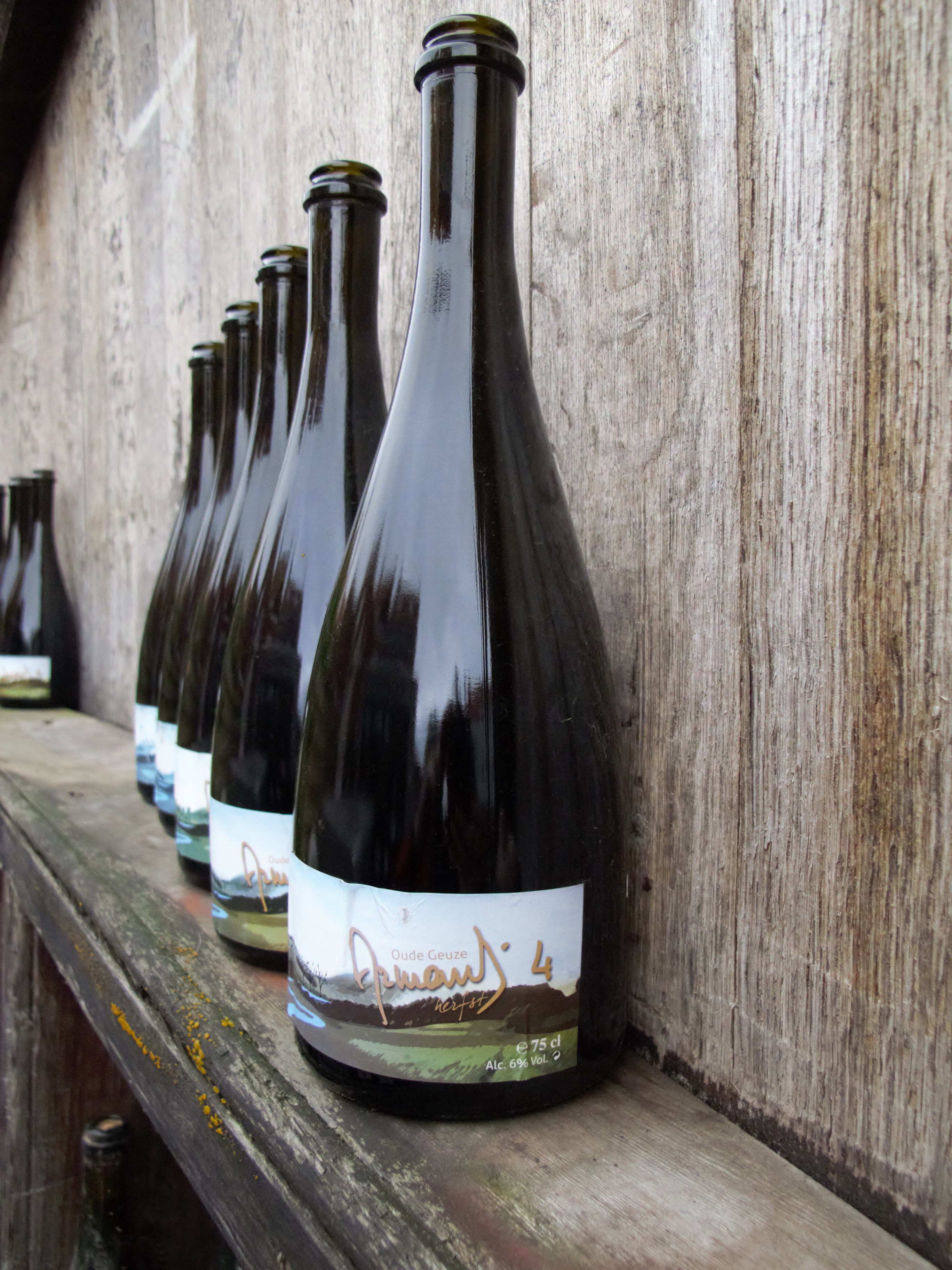 In the early 1960s, Drie Fonteinen (Three Fountains) moved to a new site across from the Church and became renowned not only for its geuze but also as the home of the De Mijol Club, a legendary literary club, firm in the furthering of Flemish culture, that consisted of Belgium’s clever-clog cognoscenti such as Herman Teirlinck, August Vermeylen, Alfred Hegenscheidt, Ernest Claes and Fernand Toussaint van Boelaere.

“In the 1950s, Beersel was home to 14 different blenders and one brewery,” says Armand. “Each café had their own signature style and we just sold our beers through our bar and restaurant. It was a great place to be – especially if you liked Geuze.”

But by the time Armand had returned from Military Service and trained as a chef, the general love for lambic beer was waning amid appetite for lagers and specialist Belgian beers like Palm. “Everything became sweeter,” says Armand, “things changed”.

He and his younger brother Guido inherited both the restaurant and the blending businesses in 1982. Armand’s time was divided between working as a chef and looking after the lambics – often alongside Gaston, a reluctant retiree.

In the 1990s, the bar was making more money than the beer. Lambic land was not an easy place to make a living for a blender. Brewers had recognised the potential profit – albeit small; public palates were pining for sweet rather than sour sensations and geuze was growing increasingly synonymous with granddads.

“It was very hard,” recalls Armand. “Very few people were doing what we were doing. We thought very seriously about calling time on the beers but we kept going. There was a concerted campaign to keep Geuze alive and, again, we weren’t really allowed to stop.”

With Lambic cultivating cult status, Armand began selling his beers beyond the bar and restaurant and in 1998 he began brewing Lambics himself – on a 10 hectolitre brewhouse leased from the Palm brewery. “I didn’t set out to change the world,” he says. “But I didn’t want to die regretting that I didn’t ever brew my own beers. So I did it.

“My father was very angry with me. He thought I was crazy. When he tasted a geuze made with lambics that I’d brewed, it was the first direct complement he’d ever paid me.

“Until then, I didn’t feel like a brewer in my head. I had no formal brewery training but I received guidance from everywhere and everyone. I have a mantra that it can always be better. You never reach the pinnacle with this kind of brewing – that’s what is so wonderful about it.” 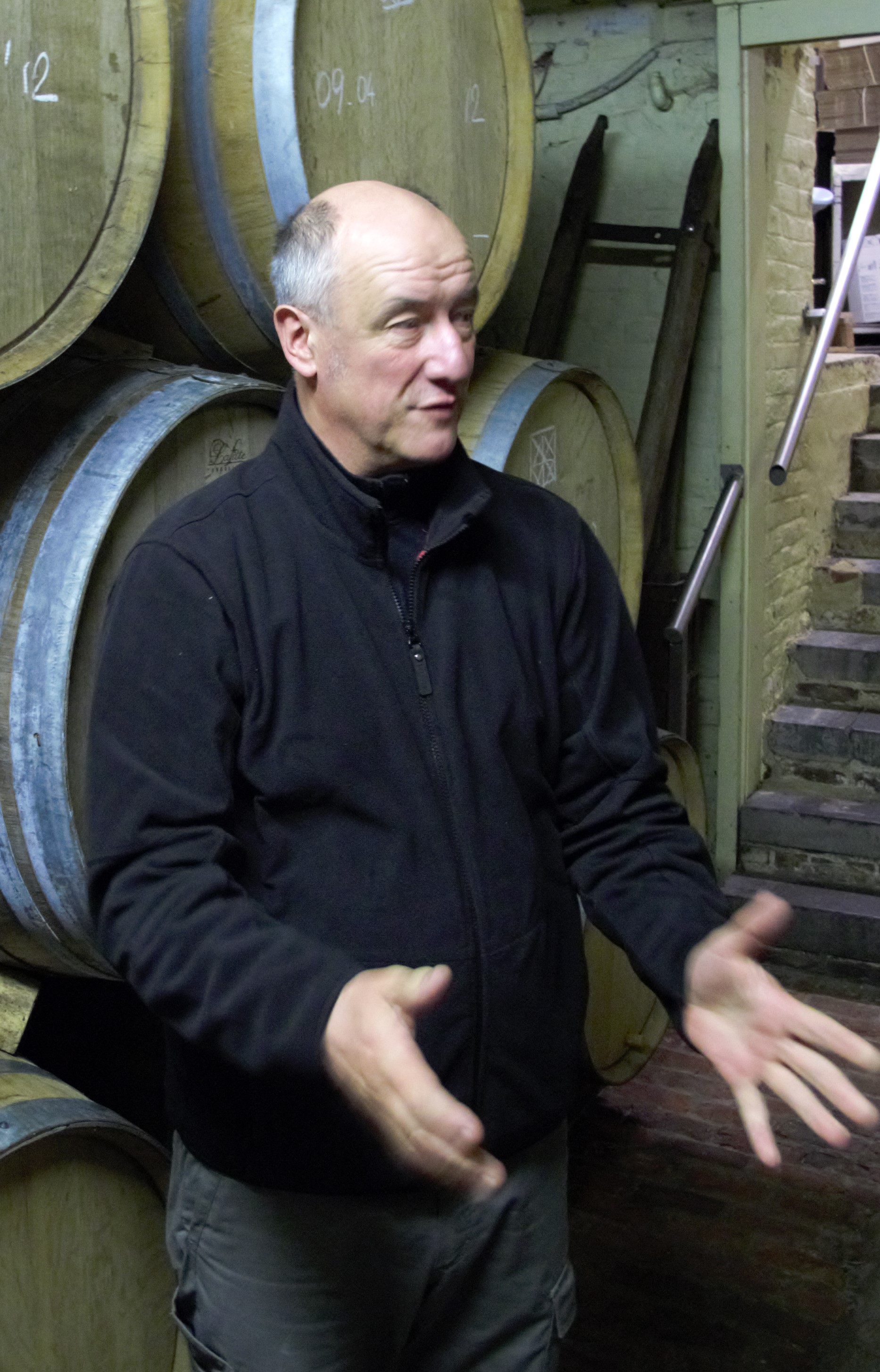 In 2002, Armand focused solely on the beer by setting up A-D Bieren, the brewing and blending division of Drie Fonteinen. New stocks of Lambic were sourced, a new bottling line was installed, he bought six dozen 1,000 litre wooden tuns from Pilsner Urquell and a warehouse to put them all in.

He even breathed life back into an old-fashioned interpretation of a kriek brewed with Belgian cherries. “We use two kinds of cherries – Polish cherries and Schaarbeek cherries that we pick ourselves,” adds Armand. “They’re sweet, sour and wild cherries and they’re hard to find.”

But that was all before the disaster in 2009. “I needed a catastrophe to wake me up and invigorate me,” says Armand. “The setback gave me the courage to continue and we’re back where we want to be. I’ve been one part of a historical chain and, crucially, the chain didn’t break.”

It’s been strengthened too. Firstly, a 28 year-old apprentice called Michael Blancquaert was taken on invigorating Armand like a young lambic does an old, while in 2012, Armand opened a small four litre lambic brewery. “It’s small but it’s exciting,” beams Armand.

Drie Fonteinen will continue to, rather aptly given the name, source lambics from three producers. “I use Girardin, Boon and Lindemans,” says Armand, as we walk down into the beer cellar. “Lindemans has the most brettanomyces character, Girardin brings the most bitterness and Boon has great balance.”

The cellar is a time warped temple of wort-filled, wooden tuns. It’s here where Armand performs his art, chalking up the dates, tapping the tuns, blending old lambics with new and bringing different beers together to create Geuze – the champagne of beer.

Blending, he adds, is more instinct than exact science. “When I studied and looked into Brettanomyces and got out microscopes I made my worst lambics. It’s better not to think about it. Too much analysis is a bad thing sometimes. You’ve just got to let it do what it does.”

While he endeavours to create Drie Fontienen’s “green apple” signature every time, Armand concedes his is not a quest for consistency. “Nothing is exact,” he says. “That is what is so exciting. I am creating new tastes every time and there is no pressure to conform. I do what I want to do. I’m a free man who can brew what I want to brew.”

“That is what’s so exciting, creating new tastes every time with no pressure to conform. I do what I want to do. I’m a free man who can brew what I want to brew. Certitude is not fun for me – I like it when anything can happen.”

This article was first published in “Boutique Beer, 500 of the World’s Finest Craft Brews” published in 2013.