30 years of Withnail and I, the finest alcohol-soaked film in history
Writing

It’s been 30 years today since “Withnail & I” was released and it’s aged like a fine Bordeaux.
Initially overlooked by critics, appreciation has improved dramatically over time and, like the finest of vintages, it somehow reveals new pleasures and nuances every time you revisit it.
“There can be no true beauty,” as Uncle Monty says, ‘without decay”. Three decades later, it remains a vintage piece of British cinema with its head drenched in drink and its feet, bound in polythene bags, rooted firmly in comic tragedy.

Overflowing with memorable lines and quoted in perpetuity by pub philosophers, the film’s cult status is earned, in part, by an infamous, and highly irresponsible, drinking game where viewers (mostly students) match the lead character, Withnail, drink for drink.

It’s an acutely absurd undertaking as the cult comedy is laced with a liver-quivering amount of alcohol; he sees off one pint of cider (with ice), two-and-a-half shots of gin, six glasses of sherry, thirteen whiskeys, four pints of ale, one shot of lighter fluid, (replace with vinegar as they did in the film), and nine-and-a-half glasses of red wine too.

Withnail, portrayed to perfection by the tee-total Richard E Grant, constantly “demands booze” yet from his first scene to the last, fine wine is clearly his cork-closed emotional crutch.
Each swig heightens his delusions of grandeur, deepening his denial of impending adulthood and the end of the sixties, that most decadent of decades – “my boys, my boys, we are at the end of an age” as Uncle Monty says.

Whether swigged straight from the bottle or transferring ‘its skills to the meat’, fine wine from Uncle Monty’s “sensational cellar” plays a seductive cameo role throughout – its carefree consumption offering a stark contrast to the acutely ordinary existence endured by the central characters.

Some twenty years before writer and director Bruce Robinson filmed “Withnail & I”, he was offered some bottles of musty French “muck” by the ignorant owner of a hotel in Manchester that was closing down.

Unbeknown to him, the muck was made up of some of the finest blue chip Bordeaux available. Robinson, then a struggling actor, paid £200 for 200 bottles of Chateaux Margaux, Beychevelle, Petrus with vintages including 1945 (an epic year), 47, 53, 59 and 61.
While Robinson had planned to use the wine solely as props before auctioning them at Sotheby’s afterwards, he sacrificed a small fortune by selflessly serving them up on the film set. Some years later, during a Q&A session at the British Film Institute, he said: “We drank the lot in two weeks,’ said Robinson. ‘It was saveloy and chips with…shall we have the Beychevelle or Margaux?”

The bottle of Chateau Margeaux 1953, sipped in the final scene by Withnail while reciting Shakespeare’s ‘What a piece of work is a man’ soliloquy to some wolves in London Zoo, is, at the time of writing, fetching up to £2000 a bottle.

Robinson’s eponymous, unpublished novel, ended with Withnail committing suicide by decanting a bottle of wine into the barrel of Monty’s shotgun before drinking from it and pulling the trigger. Robinson, however, decided that denoument to be “too dark.” 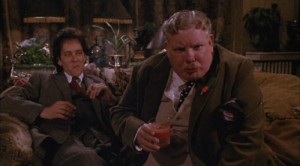