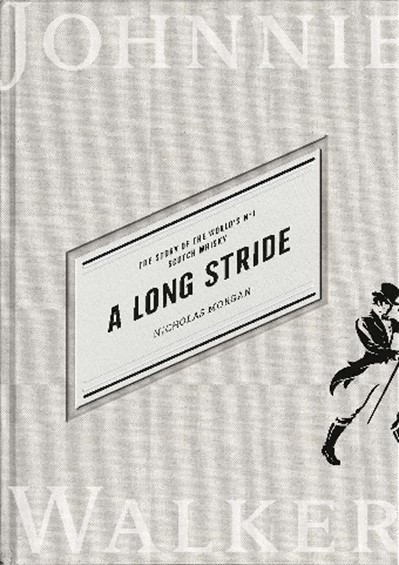 In 2020, the 200th anniversary of Johnnie Walker’s creation, whisky expert and historian Dr Nicholas Morgan published “A Long Stride” – the first in depth account of the history of the Johnnie Walker brand and business.

Shedding new light on the creation and evolution of the world’s No.1 Scotch, it’s a must read for whisky lovers, brand marketeers and those curious to know how people can shape the values of a business to ensure longstanding global success.

The history of Johnnie Walker, tracing its roots back to 1820, is also the history of Scotch whisky. But who was John Walker – the man who started the story? And how did his business grow from the shelves of a small grocery shop in Kilmarnock to become the world’s No. 1 Scotch?

A Long Stride tells the story of how John Walker and a succession of ingenious and progressive business leaders embraced their Scottish roots to walk confidently on an international stage.

By doing things their own way, Johnnie Walker overturned the conventions of late Victorian and Edwardian Britain, survived two world wars and flourished despite the Great Depression to become the first truly global whisky brand, revolutionising the world of advertising along the way.

Ultimately the story is a testament to how an obsession with quality and a relentless drive to always move forward created a Scotch whisky brand loved in every corner of the world.

The quality of his whisky was the standard by which he measured himself. He had an
obsession for quality (which he had no doubt inherited from his father) that was passed on to his sons, and which was written into the life blood of the business, and of the brand. It’s still at its heart today.

In John Walker’s grocery shop one of them laid the foundations for a brand of blended Scotch whisky which set out on a long journey from Kilmarnock till it strode the world like a Colossus.

A simple thing, a wonder of the world.

The Scotch industry as we know it today is the result of the endeavours of a hugely talented group of men, mostly (but not entirely) Scots, in the late Victorian and Edwardian period.

There has been a tendency to view the entrepreneurs who made Scotch such a global success as a collective, the ‘whisky barons’, with shared characteristics and values. As we shall see, the ‘thrawn’ Walkers of Kilmarnock were very different from many of their counterparts, and these differences defined some of the core values of their business.

It would be a considerable mistake to think of them in the same way as one might some of the whisky celebrities who sought out social advancement and political place to help build their personal reputations and those of their businesses.

The Walkers eschewed publicity and self-promotion; when members of the Walker business were honoured by titles it was for exceptional service to the country in its deepest time of need.

With unbroken family management from its foundation to 1940, this is the story of three generations of quite remarkable Kilmarnock men who rose from obscurity to lead the world of whisky.

And important though the family was, it’s also the story of the remarkable men who helped them, very often in the earlier years also men of Kilmarnock or its environs; after all, who else could you trust?

Whisky is a remarkable drink and tends (in the author’s experience) to attract, like moths to a flame, remarkable people into its seductive orbit. The story of the Walker business shows it was ever thus.

By the second decade of the twenty-first century  John Walker & Sons strode the world not just of Scotch, but of whisky and spirits in general, like a Colossus. A brand of size and scale unimaginable to John Walker the founder, and inconceivable to his son Alexander, in so many respects the intuitive genius behind the success of the firm, and to his handful of carefully picked and long-serving (and in some respects long-suffering) staff.

Sir Alexander Walker, the longest-lived of John’s grandsons to work in the business, only saw sales reach around 1.5 million cases. Even that was a remarkable achievement, given the capital and logistical organisation required to deliver that many bottles of Scotch, all ‘guaranteed the same quality throughout the world’.

But would he, or his elder brother George, or James Stevenson, or the men they
recruited who were still running the business into the 1950s and 1960s, have imagined 5 or 10, let alone 15 or almost 20 million cases of Johnnie Walker whisky a year?

Would they have understood, all of them, the remarkable role they played in this remarkable achievement, particularly in overcoming successive threats of adversity – floods, hostile fiscal regimes, wars, Prohibition, economic depression – and each time emerging stronger?

If Scotch was Scotland’s gift to the world, then these were the men, and latterly women, who parcelled it up and made sure it was delivered safely to every corner of the globe. In so doing they built the engine for growth of the whole Scotch whisky category, and importantly a brand which firmly remains the world’s No. 1 Scotch whisky.