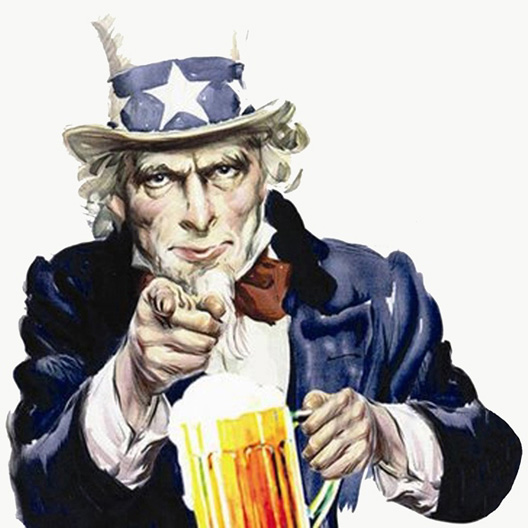 American Presidents have had an eclectic relationship with alcohol.

History shows a social sip has been a pastime for many of the previous 44 incumbents, even those unfortunate enough to serve during Prohibition.

Some have abstained of course, and drinking less but better is the key – we wouldn’t condone a whiskey while that already harum-scarum finger hovers over a nuke button.

The founding fathers were less than moderate, an enthusiastic gaggle of giggle juice guzzlers they all filled their bellies with the fire and courage of alcohol.

We commonly associate early colonial anger over British oppression with the 1773 Tea Act, but the taxes on sugar and the subsequent impact on East Coast rum production wound the revolutionaries up in equal measure. George Washington was particularly miffed, the first President needing the molasses to sweeten his beer, but in lieu of rum he distilled his own whiskey.

Benjamin Franklin was the least conservative drinker among the revolutionary heroes and curated more than 200 terms for drunkenness, including “getting the Indian vapours”, “jambled” and “contending with Pharaoh”.

Contrary to millions of beer geek T-shirts, Franklin never said “beer is proof that god loves us and wants us to be happy” but he did write a dissertation discussing why different wines produced different kinds of farts (or perhaps we should call them “Trumps”) and the best scents with which to mask them – bergamot worked well with claret, Lilly with Burgundy and rose with Madeira.

Then there was Thomas Jefferson, who poured more money than sense into wine and John Adams who substituted his breakfast apple juice for cider. Even the new constitution was created in the pub, the original 55 signatories celebrating by getting wasted on 54 bottles of Madeira, 60 bottles of claret, eight bottles of whiskey, 22 bottles of port, eight bottles of hard cider, 12 beers and seven bowls of alcoholic punch large enough that, according one observer, “ducks could swim in them.” The bill must have been massive.

For nearly 100 years the White House was awash with booze, from James Maddison who championed champagne, to James Monroe whose oenophilic over-spending helped buoy the burgundy market. Some took it too far, Martin Van Buren drank so doggedly he was known as ‘Blue Whisky Van’ and Franklin Pierce over-stepped the mark when he said: ‘There is nothing left…but to get drunk’.

True Abraham Lincoln barely touched the stuff, but he was the son of a distiller, owned a grocery shop and recognised the economic value of alcohol. Perhaps unsurprisingly then, a backlash ensued during the second half of the 19th century, an era peppered with Presidents influenced by a strengthening Prohibition movement. A tug of war between tipsy and temperance.

Ulysses Grant who could spend $1800 on Champagne during one dinner was succeeded by Rutherford B Hayes who banned booze from the White House. Grover Cleveland too often in cups as a beer swiller, was tellingly followed by Benjamin Harrison who was dry.

As the 20th century turned, temperance claimed the victory with a total ban, but Prohibition proved a daft decision, crippling the economy, damaging health and only facilitating the organisation of crime. Interestingly President Woodrow Wilson vetoed the Prohibition Act in 1919, so we can’t blame him, but three more Presidents suffered. Amongst them Warren Harding who secretly sipped Scotch on the golf course and Herbert Hoover who was talked into destroying his wonderful wine collection to honour the regulations. Sanity would be restored by Franklyn D Roosevelt in 1933, who ended the ban so could enjoy his beloved martini, shaken each day with his own special set of silver shakers.

At the crucial 1943 conference in Tehran, with talks getting tricky and millions of lives on the line, FDR (quite literally) broke the ice by giving Joseph Stalin his first ever Martini.

When FDR enquired how he liked it, the Russian replied: “Well, all right. But it is cold on the stomach.” Yet, despite Stalin’s initial indifference, its role in Tehran caused Nikita Khrushchev to later declare the Martini “America’s lethal weapon”.

After Roosevelt the 20th century presidents never fully recovered, there were drinkers there, but rarely with celebratory tone. Few are as iconic as John F Kennedy, whose time in office was infused in booze. His father had secured the distribution rights of Gordon’s Gin when Prohibition ended, but JFK’s tipple was a daiquiri, making you wonder what the Cuban crisis was really all about. His wife, equally iconic, was said to enjoy the occasional grasshopper in Paris.

Granted Richard Nixon enjoyed Chateau Lafite Rothschild but, true to form, he duped his guests by pouring them cheaper plonk directing his staff to conceal the label, so he’s hardly a poster boy for a drinks campaign. And while Gerald Ford occasionally enjoyed a three martini lunch he was quickly followed by Jimmy Carter who condemned it.

Clinton’s taste in tobacco products was matched by an equally salacious snakebite and black, while Bush junior had a problem, and he didn’t drink either. Then came Obama, a man who restored order with a balanced beer drinking approach to life, he even added a brewer to the staff who used honey from White House bees in a bespoke Presidential beer. He’ll be sorely missed for that.

The reasons Donald Trump should not be left in charge of a shopping trolley, let alone the keys to the White House, are plentiful and well-documented – from his use of the word “bigly” and lamentable business legacy to his dubious post-modern feminist principles, quite astonishing lack of political acumen and, most worrying of all, his bewildering hair.

But, worse than all that, Trump doesn’t drink. He never has done and, so he says, he never will – which, let’s be honest, explains a lot. Joe Biden, the current incumbent, steers clear of alcohol due to a family history of addiction.